The Wisdom Wednesday lecture series aims to draw on the deep well of African history, culture & wisdom in order to engage in Sankofa (the act of remembering what was lost) for the benefit of current and future generations.

We host various presenters on topics related to African history, culture and personal development, and wholistic health. We also host lectures and book signings by various prominent authors. The purpose of Wisdom Wednesdays is to create an environment where participants gain knowledge and insights that will allow them to improve their lives and commit themselves to transforming their communities for the better.

The program is free and open to the public and runs from 7pm to 9pm. 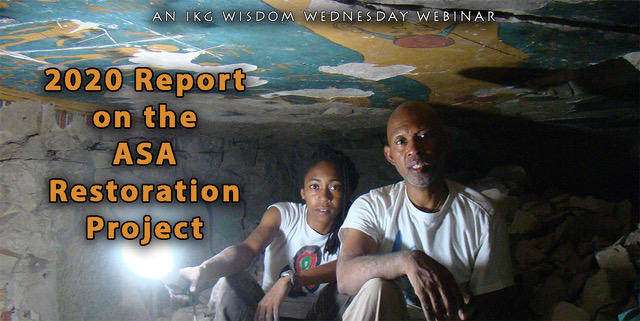 Register in advance for this Zoom webinar:
https://www.eventbrite.com/e/119566020185
On September 21, 2008, Anthony Browder established the ASA Restoration Project to honor the life and legacy of Asa Hilliard by funding the ongoing excavations of The South Asasif Conservation Project (SACP) in Luxor Egypt. The SACP was established by Elena Pischikova in 2006 to excavate and restore three 2700-year-old Kushite tombs on the West Bank of Luxor, near the Valley of the Kings and Queens.
In 2019 there were 240 archeological missions in Egypt, and all of the missions except one, were funded by an international consortium of museums, universities and institutions. The ASA Restoration Project is the only excavation in Egypt that is primarily funded by African American dollars, and it has raised over $500,000 to fund this historic undertaking.
Every September, Mr. Browder makes a report to the community and provides updates on the ASA Restoration Project, and every year he provides details of the discovery of new burial chambers and artifacts excavated at the site. Last year Browder shared details of a new exhibition of 104 artifacts they discovered which are currently on display at the Luxor Museum, and his new role as General Director of the South Asasif Conservation Project.
On September 16, Mr. Browder will discuss progress made during the 2020 excavation season and the latest research on his discovery of “sankofa” symbols in two 25 th dynasty tombs in 2016.
You will not want to miss this evening’s first-person account of twelve years of excavations and discoveries in the most famous necropolis in the world.

Friends of the Congo
“Break the Silence Congo Week”